Most Frequently Asked Question about my work...

The one question I get asked the most is “where do you get your circuit boards from?”.

In the beginning, there was… TV John
My very first salvaging trip was in the late 1980’s to the backyard of the home of ‘TV John’. At one point in his life TV John was a TV repair man. His backyard was an archive which included some of the earliest models of televisions. Because of my early fascination with electronics, and because I took on the role of repairing my family’s electronics, I recognized those vacuum tubes.

I was invited to go to TV John’s by a friend of mine who was looking for some pieces for a costume she was creating. She was a videographer and a performance artist and was to play a big part in the birth of my circuit board art. My initial experimental pieces, all pins, were created from finds salvaged at TV John’s.

TV John’s backyard was a wonder land of tubes, wires and a few old-school circuit boards, the kind that definitely looked hand-made. But it did not compare to the salvage sales put on by Los Alamos National Lab. The Thursday sale was where all kinds of items including office furnishings and equipment, scientific equipment and mainframe computers no longer needed by the Lab were placed for sale. The items often sold in lots so one would select a pile not knowing exactly what was in the boxes.

Los Alamos National Laboratory
It was at the salvage sales where I was able to procure large circuit boards, now a rare find, now a technological antiquity. The salvage sales were where I purchased the majority of the circuit boards and wire that became my works of art. I was such a prolific buyer that to this day I still have a large stock pile of materials.

The Black Hole
It was also at the salvage sales where I met Ed and learned of the ‘Black Hole’. Ed would arrive at the salvage yard with a team of young ‘pickers’. Ed and I would often be attracted to the same piles of technological discards and a few times had to negotiate for who would walk away with which piles. However, every time I need something special or specific such as copper boards or ribbon cable, I would run up to the Black Hole and pay Ed a visit.

Any more, I have people who collect my work or who have heard of my work and they will call me up or visit my booth at Contemporary Hispanic Market  or the Recycle Santa Fe Art Festival,  and leave me a broken laptop or cell phone or VCR player.

Over the years, Marion’s “Mixed Tech Media” art has shown in several museum sponsored and invitational shows throughout the US, Canada and Mexico, and over fifty juried group shows.

Awards for Marion’s work include “Best of Show” awards, “Juror’s Awards”, a “Director’s Recognition” award, an “Award of Merit” in the Manhattan Arts, 1995 cover art competition, “Honorable Mention” awards and a purchase award.

Marion is a frequent speaker giving presentations to young persons and art professionals.

When Marion is not creating her mixed tech media work, she can be found tending to her garden and hens, enjoying a classic movie with her compañera of over three decades or fishing with her nephews. 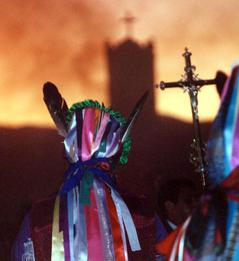 About her work Marion says:  My artwork represents the coming together of the dichotomy of my life experiences.  I was born into the Hispanic tradition and influenced by the Native American surroundings of my childhood.  I was born to a family and community of farmers and ranchers yet I was raised in the shadows of one of our nation’s foremost high technology research facilities, (the Los Alamos National Laboratory).  My artwork combines the images and symbols of my culture and of my environment with the components derived from the technology developed in my backyard.

In 1984 Marion became interested in the concept of video as art.  It was during that period of time and experimentation she discovered the computer circuit board. Marion’s circuit board art, which she refers to as “Mixed Tech Media”, officially debuted September of 1992 when her work was selected to appear in “Something Wild!”, a national juried exhibition held in Las Vegas, NM.  In April of 1996, Marion closed her psychotherapy practice to focus on the creation and evolution of her art. 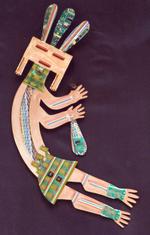 My favorite story of a salvaged item

Years ago I had the honor of being invited to show my work in a museum-sponsored art show featuring Traditional and Contemporary Hispanic artists. The show was in Colorado Springs. A retired serviceman happened upon my booth and was intrigued by the work. A couple of weeks following the show, I received a package from him and when I opened the box I found several pink circuit boards, a color I had never seen and would not come across again. He explained to me that the boards had come from decommissioned missiles. I took the circuit boards and made crosses out of them. 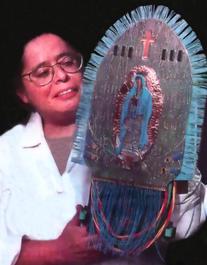 Having spent many hours in the Catholic Church on the Ohkay Owingeh, (San Juan) Pueblo I was surrounded by beautiful stain glass windows, towering statues of various Saints, and bultos and retablos created by local artisans. I had uncles who were Hermanos so during Lent we would attend services at the Morada. Being raised in the heart of, and having childhood friends from the Eight Northern Pueblos, we rarely missed a Feast Day or Dance.

A joy in my life was being in the garden with my Grandmother Marina, my Tia Candé and my father. As a child we always raised gardens. In the garden I learned how precious and giving mother earth is, I learned about the food traditions of my culture of origin, I learned about planting, harvesting and canning and I learned about our acequia and what a blessing it is to be able to irrigate with acequia waters.

It seemed a natural fit to take objects which when thrown into landfills, poison the earth, and reconfigure them into the imagery which fills my essence. All of these experiences and visual input profoundly influence who I am and the art I create and as I assemble discards from technology, I do so from a place of reverence as I believe that sacred and ancient symbols and images must be dealt with from a place of respect.