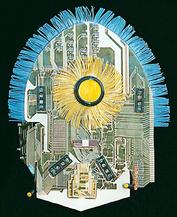 The Dance of the Matachines is a “dance – drama” generally performed around Christmas or on the Feast Day of a village’s Patron Saint. Moorish in origin, the Dance, performed to this day by both Hispanic and Native American dance troupes throughout the Rio Grande Valley, was brought to the Americas by the Spanish Conquisadores.

Each dancer will create the headdress they wear. Our Lady of Guadalupe is a popular image used to adorn the elaborately decorated headdresses. 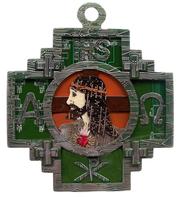 Christ
I have often wondered what Jesus really looked like. It’s been said that He had a ‘lion-esque’ look. I have also heard it said that Christ is the visible image of God.

In ancient Atocha many men were imprisoned because of their faith. The prisoners were not fed and only children twelve years and younger were permitted to bring food to their imprisoned family members. Children came home from the prison with a story that those prisoners who had no young children to bring them food were being visited and fed by a young boy. None of the children knew who he was, but the little water gourd he carried was never empty, and there was always plenty of bread in his basket.

This work, which is part of the permanent collection at the Museum of International Folk Art, in Santa Fe, New Mexico, represents the more traditional image of Santo Niño de Atocha, holding a basket of food and a jug filled with water and wearing the cockle shell on his cape identifying him as a pilgrim. 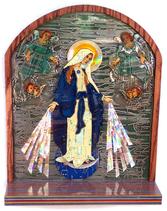 In addition to wearable art, I create wallhangings, (“e-waste” retablos), and sculpture pieces.

The themes I depict in my art include:

I will occasionally create other images and ‘free-form’ pieces 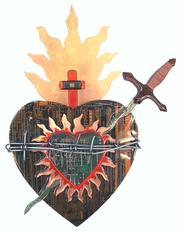 The Corazoń Santo, (Sacred Heart, also known as the “Sacred Heart of Jesus”), is the representation of Jesus’ divine love for humanity with special emphasize on the unmitigated love, compassion, and long-suffering of the heart of Christ towards humanity. The Corazoń Santo is depicted as a flaming heart shining with divine light, encircled by the crown of thorns, surmounted by a cross. It is also depicted pierced by the lance and bleeding. The lance and crown of thorns allude to the manner of Jesus’ death, while the fire represents the transformative power of divine love.

Guadalupe
In December of 1531, on the Hill of Tepeyac, outside of what is today Mexico City, Juan Diego saw a vision of a woman who spoke to him in his native Nahuatl language.  She healed Juan’s uncle. She also told Juan to gather flowers from an area which was barren. There he found Castillian roses, not native to Mexico. Juan gathered the flowers in his tilma (cloak), and when he presented the flowers to the Archbishop on December 12th, the flowers dropped from his tilma and on the fabric was the image known as that of the Virgin of Guadalupe. The image is housed in the Basilica of Our Lady of Guadalupe in Mexico City. December 12th is the feast day for Our Lady of Guadalupe, and is celebrated from the Basilica throughout the cities and villages of the southwest.

In the tradition I grew up in, when an item is lost, following the panic which sets in when one realizes they have lost something of value to them, we pray to St. Anthony to help us find the lost item. According to the story, the reason St. Anthony's help is invoked for finding things lost or stolen, Anthony had a book of psalms that was of some importance to him as it contained the notes and comments he had made to use in teaching his students. A novice who had decided to leave the monastery, took the Psalter with him. Prior to the invention of the printing press, any book was an item of value. Upon noticing it was missing, Anthony prayed it would be found or returned. The novice was moved to restore the book to Anthony and return to the Order.

Our Lady of Lourdes –

(Thank you for the healing) 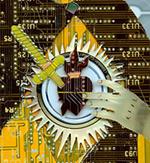 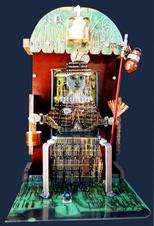 The imagery of this piece depicts the tender moments of unconditional love shared between a mother and her child.  The sheep share in the peacefulness and serenity of the moment.

Other Apparitions of Mary
In the Catholic tradition, it is believed that the Blessed Virgin Mary has made a number of supernatural appearances on earth. The apparition is generally given the name of the town where Mary’s appearance occurs. A number of the portrayals of these apparitions are visually very poignant and beautiful and are the source of a deep spiritual experience for me when I recreate them. 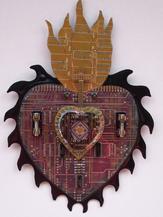 Saint Thérèse of Lisieux popularly known as "The Little Flower of Jesus”, was a Carmelite nun. Upon the orders of two prioresses of her monastery, who saw the many miracles worked at her intercession, St. Therese wrote The Story of a Soul. It is the story of simplicity in God’s service and the themes of her spirituality: confidence in God and love, abandonment to God's merciful love, and her mission in the church and world. The Little Flower  died of tuberculosis at the age of 24.

Saints
When the Spanish came to the New World they brought with them their Catholic faith and many Santos, (Saints). Each Santo oversees different tasks and different aspects of daily life.

A Child is Born

In Catholic teaching, at the end of her life on earth, it is said that the Blessed Virgin Mary bodily and spiritually ascended into heaven and is there honored as the Queen of Heaven. This piece, hanging in the “Painting the Divine” show at the New Mexico History Museum, uses the film removed from CDs, the portion of the disk where the information is recorded, as a dramatic effect representing both Mary’s ascension into Heaven and a showering of her blessings onto mother earth and all of her inhabitants.

Inspired by the Native American Thunderbird image, Techna-Bird is a guardian spirit that, with its great wings, has the power to invoke thunder, lightning, rain and hail.
This piece is a Wall Hanging
7 ½” x 5” x 1” in size 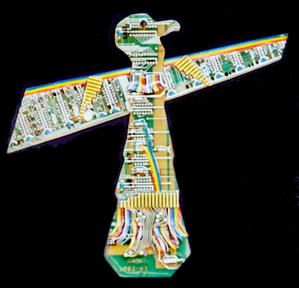 Other Images and Free Form pieces

As a child we would visit El Santuario de Chimayo particularly when someone in the family was in need of the holy healing dirt from El Pocito. The room adjoining El Pocito has a prominent statue of Santo Niño de Atocha and I recall stories of how the shoes on a statue of the child Jesus would wear down because Santo Niño goes on walkabout. Inspired by this story, I imagined the Christ child, (operative word being child) walking through and playing in my garden.

Our Lady appeared 18 times to Bernadette Soubirous, a young, poor and sickly girl. The apparition occurred in the grotto of Masabielle, close to Lourdes in France in 1858. When asked by Bernadette who she was, the apparition replied, “I am the Immaculate Conception”.

Our Lady asked Bernadette to wash her face at the fountain but there was no fountain there, so Bernadette dug a hole in the ground, and with muddy water washed her face. People ridiculed Bernadette for doing this, however in the location where she dug sprang the famous fountain of water that has healing attributes. Many sick people have bathed themselves in that water and many have reported miraculous healings.

Another being which makes it home in the Heavens, this image represents a beatific essence, one that is available at our calling, to accompany us in our everyday journey. This piece, made of six different colors of circuit boards, shows the vast array of colors the boards can come in.This piece is a Wall Hanging13 ¼” by 8” by ½” in size 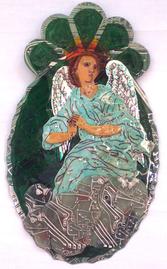 The Monarca (the King), is the lead dancer in the Dance of the Matachines. He is said to represent Moctezuma, the Aztec King. This work was built around a bicycle helmet and was worn during a performance art piece. A small video camera was mounted inside the headdress, behind the lens and fed to a bank of monitors the footage captured as the performance artist walked through the audience dressed in Kabuki costume.

Matachine Headdresses
Growing up north of Española, as a child, my father would pack all of us into the car to attend the dance of the Matachines which took place at Ohkay Owingeh Pueblo, Alcalde and the surrounding villages. The beauty and variety of the headdresses and the colorful ribbons are images which remain with me. 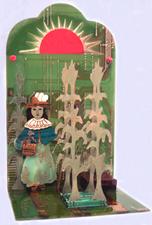 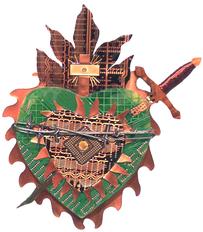 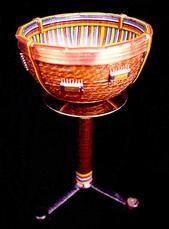 The Chalice from the Palace has the brew that is true

Chalice was created using wire wrapped around the exterior of a half sphere found among salvaged discards from the Los Alamos National Laboratory.  The “cup” sits on a disc drive and spins.  This piece is a Sculpture 8” x 4” x 4” in size

A Prayer from the Heart

I create Milagros, and various renditions of the Corazoń Santo 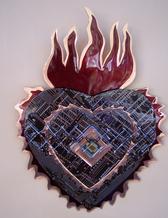 “I will spend my Heaven doing good upon earth…..

I will let fall from Heaven a Shower of Roses”

Milagros came with the Spanish on their journey to what is now Central and South America. The word “milagro” means “miracle” and also refers to the folk charms, ex-voto objects, which came in a variety of shapes and which are used to assist in focusing attention towards a specific ailment or a wish for a specific object. A Milagro created in the shape of a heart can represent the desire for a miracle in the area of love or it can represent the desire for a healing of the heart, either at the physical or emotional level. The series of Milagro Hearts which I create represent, for me, the healing of the heart.