Bears
Mama bears are affectionate, protective, devoted, strict, sensitive and attentive to their young. Although they are secretive and shy, bears are also highly evolved social animals. In folklore, bears are strongly linked to healing perhaps because they forage for plants, implying knowledge of herbal medicine. Bears are also said to experience the ultimate transformation as they ‘die’ and are reborn each year through the hibernation cycle.

The Bear is believed to be an invaluable ally when faced with change and transition.  The spirit of the Bear is symbolic of the state of hibernation, a period during which the focus is on the inner and transformational process. My Bear pins represent for me the strength and diligence to have a steady, measured walk in life. The Bear pins measure 2 ¼” by 1 ½”.

According to history and tradition, in ancient times buffalo roamed from the Alleghenies to the Rocky Mountains and from the Great Lakes to the Mexican states of Durango and Nuevo León. It is said that buffalo arrived here by crossing over a land bridge that once connected the Asian and North American continents. Known for their power, stamina and persistence, the Lakota people believe that the birth of a white buffalo calf will be a sign that White Buffalo Calf Woman will return to purify the world, bringing back harmony and balance. Because I was using circuit boards, sometime also referred to as ‘computer chips’, to create these pieces, this series became known as the ‘buffalo chip’ series.  The Buffalo Chip pins are 2 ¼” by 1 ¾”.

Angels
From the Greek angelos comes the word angel which means ‘messenger’. Famous angels include Michael the Archangel, Gabriel who performs acts of justice and power, Raphael, a healing force and Ariel who journeys with us on the path to our destiny. The Angel pins I create are a physical form of a benevolent essence, ‘ministering spirits’, operating in the unseen realm, which carry communications from the unseen realm providing guidance, protection, strength and encouragement. The circuitry angels accompany us in our everyday journey, transmitting glorious messages to and from Divinity. The Angel pins are 2 ½” by 2” in size.

I first began creating TechnaCessories for the TechnaCentric in the 1990’s, the early years of my work. It was in this line of work that the Angel pins, Bear pins and what as to become the ‘Buffalo Chip’ series were born. Later I created a line of images based on creatures found throughout the Southwest.   It was at that time when the Gecko design was first introduced.

The “MudHead” design, inspired by the Koyemsi Kachina originates with the

during the dances, drumming, dancing themselves and playing games with the audience. The Mudhead performer may

also act as an announcer for events and

an enforcer.  The mask for the Mudhead

is actually mud-daubed, symbolizing an

early stage in the development of man.

My rendition of the Mudhead image,

for me, represents a guardian and a

symbol of strength and protection.

Occasionally I will create special order cuff links and earrings.

The 'free form' design available as bolo ties are also created as pendants.

Corazońes Santo
The translation of Corazoń Santo is “sacred heart”. There are two recognized Sacred Hearts: the Most Sacred Heart of Jesus and the Immaculate Heart of Mary…

The heart is the place where we find the deepest part of ourselves. Like most of the hearts I create, Corazoń Santo pins are symbolic of the deep love we are capable of, while simultaneously possessing the capacity to hold pain also at that very deep level. Corazoń Santo pins range in size from 1 ¼” to 2”.

In addition to wall hangings and sculpture pieces, I create wearable art in the form of pins and bolo ties.

The pins I create are:

Within the category of TechnaCessories are:

AzTechna is a term I coined to describe imagery inspired by the ancient Aztec and Olmec cultures transformed using technological components. AzTechna designs include:

The bolo ties I create are:

In an effort to use every bit of the e-waste I have salvaged, I create smaller pieces in the form of money clips which, with a chain, can be worn as ‘TechnaTags’, (dog tags), and pendants which are Free Form pieces which hang from woven wires.

Occasionally I will create special order pieces such as cuff links and earrings.

the Indigenous cultures of the Southwest, United States.

The four designs within the AzTechna series – the Long Ladies, Olmec, Corn Dancers and Mudheads – are my interpretation of legends and myths, representing spirit movement through time. Each creation is on a journey, each carrying a connection and an imprint from the ancient past to the present and future. As time travelers, the pieces hold the story, knowledge and wisdom of the past and

hold the tale of wonders yet to come.

Wearable Art for your Christmas Tree or Home

Decorate your Christmas tree  - Decorate around your house with Techna Ornaments.

Olmec
Often regarded as the “Mother Culture” of the later middle American civilizations, the Olmec are a culture of ancient people of the east Mexico lowlands. Long before the Aztec empire, the Olmec culture was thriving.  The Olmec introduced writing to the new world.  The most recognized symbol of Olmec civilization is the ‘colossal heads’.  The colossal heads, seventeen stone carvings of human heads found in what are now the states of Veracruz and Tabasco, vary in height from 4 feet to 11 feet and weigh between 6 and 50 tons. The colossal heads discovered,
all sport distinctive headdresses and most of the heads wear large ear spools inserted into the ear lobes. Olmec pins measure approximately 1 ½” by 2 ¼” in size.

The creation of Money Clips and TechnaTags are an effort to use as much of the circuit board and components as possible, sending less discards to the landfill.

TechnaTags are essentially a techna money clip on a chain and can be worn around your neck.

A uniquely American accessory originating in the Southwest, the bolo tie is said to date back to between 1866 and 1886. (There is a bolo tie on display at a trading post on the Zuni Pueblo, NM dating back to that era). The name ‘bolo’ is derived from boleadora, an Argentine lariat. The word ‘bolo’ is also said to come from the Spanish, Boleadoras or bolas, ("ball") which are throwing weapons made of weights attached to the end of cords.

The bolo tie emerged as a form of men's neckwear in the 1940s and is now the official neckwear of New Mexico, Texas and Arizona, which in 1971, was the first state to designate it as such.

I create bolo ties from the AzTechna images described above, the image of Our Lady of Guadalupe and smaller versions of the Matachine Headdress. I also create bolo ties in ‘free form’ designs.

Geckos
Alert, fast and agile, geckos are unique among lizards in that they possess ‘voices’. They use chirping sounds in social interactions with one another. Some can run upright on their hind legs, giving them the appearance of miniature dinosaurs. Geckos are among the most colorful lizards in the world and the diversity of color found in technological discards allow for very creative and whimsical interpretations of this creature. The Gecko pins are 1 ¼” by 2 ½” in size. 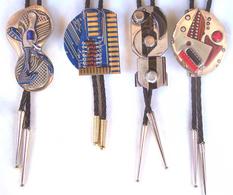 Milagros
The Spanish word for ‘miracle’, Milagros are folk charms traditionally used for healing purposes.  Milagros come in many shapes and are created from materials relevant to local customs. They serve as a reminder of a petitioner's particular need – they are used to assist in focusing attention towards a specific ailment, based on the type of charm used – or in gratitude for a prayer answered.

Milagro symbolism is not universal; a milagro of a body part, such as a leg, might be used as part of a prayer or vow for the improvement of a leg; or it might refer to a concept such as travel. Similarly, a heart might represent ideas as diverse as a heart condition, a romance, or any number of other interpretations. Milagros are also carried for protection and good luck.

The Milagros I create are all in the shape of the heart and are symbolic of the miracle of healing of the heart ~ at the physical level and the emotional level. I enjoy creating this design. Each piece has its own character and nature. They all have a playful and delicate resemblance to the Milagro wall hangings I create but are wearable. Milagro heart pins range in size from 1 ¼” to 2”. 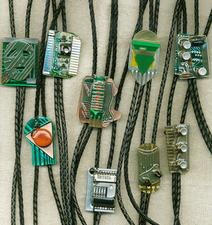 I began sketching the Long Lady design many years ago. The ‘Long Lady’ series is comprised of storytellers and dancers. Her path has ancient footsteps and the story of her journey is filled with surprises and twists. Long Ladies measure approximately 1 ½” by 3 ¼” in size.

This design was intended to depict the Native American “Corn Maiden” image, however many comment that they see the image of an angel taking flight.  The Corn Maiden is said to purify the women who grind the corn for ceremonial use. Because I am a traditional farmer and plant the seeds of the calabaza (squash) and maíz (corn) that my grandmother grew on her farm in northern New Mexico, this image has special significance for me. In addition, this image represents a consciousness around the items we discard and dispose of into the earth and is about respect for Mother Earth. Corn Dancer pins are approximately 3 ½” by 2 ¼” in size.